The Six Mothers-in-Law of Henry VIII 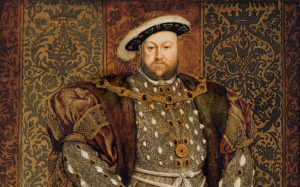 The Six Mothers-in-Law of Henry VIII

BBC MUST HAVE BEEN PLEASED, AS
THE SERIES WAS BROADCAST,
FIRST IN 2003 AND
REBROADCAST THEREAFTER,
[MOST RECENTLY IN MARCH-APRIL 2019].
FOR THEIR INDIVIDUAL AND COLLECTIVE PARTICIPATION IN THE SERIES PRODUCTION
MR. GROSSMAN,
JIM ELDRIDGE, FOR HIS ADAPTION,
AND
THE ACTORS AND BROADCAST CREW RECEIVED REMUNERATION.

THE SERIES IS REPEATEDLY DESCRIBED AS
"The "unreliable" histories of the six wives (and the six mothers-in-law) of Henry VIII"
AND
"An `unreliable' historical account "
AND
"A HISTORICAL SPOOF."

BUT YOU DEMAND HISTORICAL ACCURACY.
...FROM MR. GROSSMAN,
...AT ARCHIVE.ORG.
SCHMUCK!

WHY NOT VENT TO MR. ELDRIGE, OR BBC MANAGEMENT?

YOU EVIDENTLY THINK GROSSMAN, ELDRIDGE, BBC EXEC'S WILL READ AND HEED YOUR TIRADE.

DREAM ON YOU PITUITARY PUTZ.

We can do,
BixLives
without you.


Reviewer: BixLives - favorite - June 15, 2019
Subject: Mr. Grossman Needs More Education
Humour comes from intelligence and KNOWLEDGE. You cannot be funny without intelligence and education. At least, you shan't be funny to people with I.Q.s over 68. For example, the average British schoolboy knows that Hampton Court was Cardinal Wolsey's famous home, castle and show-place until he fell out with Henry over the divorce; —about 3 years into Anne Boleyn's amourous reign over Henry. To have Queen Catherine living in Hampton Court before Wolsey's demise is simply wrong. Moreover, Catherine NEVER lived in Hampton Court. When Henry finally took it over, Catherine had moved to another Royal Castle and would not have stayed in the same place as Henry. This is but one of MANY errors that do not help the humour of the piece. It may seem trivial to some of you, but well constructed humour stems from reality; —not hyperbole.
Mr. Grossman, the writer of this radio play, seems to be of average intelligence, but severely bereft of historic knowledge. This is obviously intended to be a humourous play, hence one might think that Mr Grossman would have immediately seen the need to learn as much as possible about the era so as to create what might be considered HUMOUR. ALas, Mr. Grossman did not believe that he needed to do research. Mr. Grossman obviously thinks far more of himself than I think of Mr. Grossman.
Mr. Grossman's humour tends towards the slapstick style, which is thoroughly ill-suited to historic comedy based on Tudor history, This radio play is neither humourous nor historically accurate. Moreover, it does not resemble a history even close to reality. Alas, Mr. Grossman's lack of historic knowledge and minimal research is, um, embarrassing to the point physical discomfort. E.g., I am presently having a difficult time keeping my intestines from strangling my spleen. When you cannot control your internal organs because of poor radio play writing, it is no longer a minor subject. It is no longer a matter of "opinion".
In short, Mr. Grossman, —assuming that the BBC has not already dragged you out to an open field and bludgeoned you for your hideous perfidy, you should start to put together a basic plan for survival in this world...and, er, um, the next. You see, He also finds great distaste in a writer whom accepts payment before performing the basic research required of his project. Yes, Mr. Grossman, YOU have offended G-d...—among others. Yep, the BIG one. The holy big banana. The Boss who is NOT Springsteen. Yes, Mr. Grossman, with this pithy little piece of tripe you have managed to offend powers far beyond your meagre understanding, and now...you MUST SUFFER.
Dear lord, man, you have distracted 20 or 30 actors from serious careers, and perhaps ruined at least half of them! No one even remotely attached to this enterprise will ever "work in this town again"!
Nooo, do not try to rush off an read a few serious history books, —or even the Cliff Notes! Do not pass Go, do not collect $200. You have failed, BIG TIME! You are NOT funny because you haven't a thought to rumble between your big ears. At this point, I sincerely doubt you have the affability and liquor cabinet to ENTERTAIN A THOUGHT.
And now, Mr. Gross-Man, it is time for you to load the .44 revolver with one good round and do your duty as a poor excuse for a hack writer.
Dear lord, hack writers everywhere are so embarrassed by your idiocy, that they no longer want to be called "hack writers".
BTW: Queen Catherine did NOT cook for Henry, she darned his clothing.
PS: Did I forget to say that you are an abysmal twit?